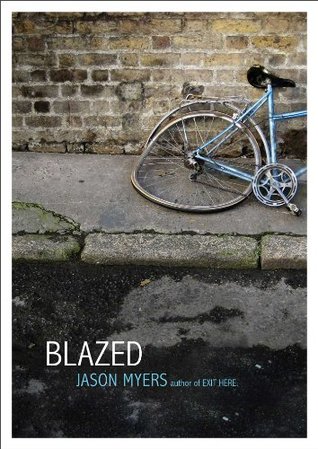 Goodreads synopsis- Jamie uncovers life-changing secrets from his past when he’s sent to live with a father he’s never met in this gritty novel from the author of Exit Here. and Run the Game.
Jamie is invincible when he is high. His anger, his isolation, his mom’s manic mood swings—nothing can shatter his glass castle. But one brutal night upends everything, leaving his mom broken and Jamie betrayed.Sent to live with a father he’s never met, Jamie is determined to hate the man he blames for his mother’s ruin. And he blocks out the pain with drugs, fierce music, and sweet, sweet Dominique. Except the more time Jamie spends at his dad’s, the more his mother’s scathing stories start to unravel. Who is he supposed to believe? And how much will he have to sacrifice to uncover the truth?

This actually isn't going to be so much a review as me rambling about how wonderful Jason Myers's books are why you need to pick his work up. Fair warning.

Alright, so if you know me well enough, you know I LOVE all things Jason Myers.  Let me start off by saying that Myers's books are some of the strangest and most fucked up books I've ever read, and, again, if you know me well enough, strange and fucked up is my absolute favorite type of book. Granted, when I say strange, I mostly mean it explores a sub-culture I'm definitely not a part of but totally respect, and when I say fucked up, I mean take  just about every "bad" thing in life- excessive drug and alcohol use, profanity, sex, shitty life situations- and mush it all into one book, that's more or less what I mean.

Myers crafts a world that's very real and that hundreds of thousands of people are living everyday, but that most people don't experience/notice. He then crafts very real characters and drops you into their lives and takes you on a journey in this world of theirs that's like the craziest roller coaster you've ever been on in your life that nearly destroys you by the end.

Now, most people I know would pick up one of Myers's books, read the first page, and toss it down in disgust. I'm here to tell you not to do that. Yes, his books have loads of profanity and drug and alcohol use from beginning to end, but you have to look further than that. His books really do have some great messages- the biggest of which, at least for me, is that life isn't all rainbows roses- that isn't an excuse to sit and wallow in self-pity, though. Live in the moment. Make memories with your friends. The only thing that really matters is right now.

Okay, this is starting to sound super freaking lame, and I'm not even coming close to doing justice to how amazing Jason Myers's books are, but trust me when I say they are worth it. These books really mean a lot to me and so many others, and they could mean a lot to you, too. And I guess these books probably speak more to people who've had shitty times, but I think everyone could take something from his books, especially Blazed.

And with that, I'll leave you with a couple of quotes that really spoke to me from Blazed, and hopefully they'll convey what I'm afraid I've been unable to adequately show in this rambling mess:

"I'll never compromise a thing I love in order to be liked by anyone else."

"All the monsters I've met in my life have come gift wrapped in gold or killer band shirts."

"...'What we might end up making is the only thing that's ever gonna outlive us. It's art, Jaime. It's timeless. Nobody can hear your excuses when you're dead. But they sure as hell can listen to your music.'"

"'Art is the only immortality we have,' Edie says.'To be able to positively affect people for generations after we're dead. This is what it's about.'..."

Until next time,
xox