Hey guys! I just wanted to post a quick haul of books I've gotten thus far since about January. This is just a tide-over till I can make a book review. Enjoy! 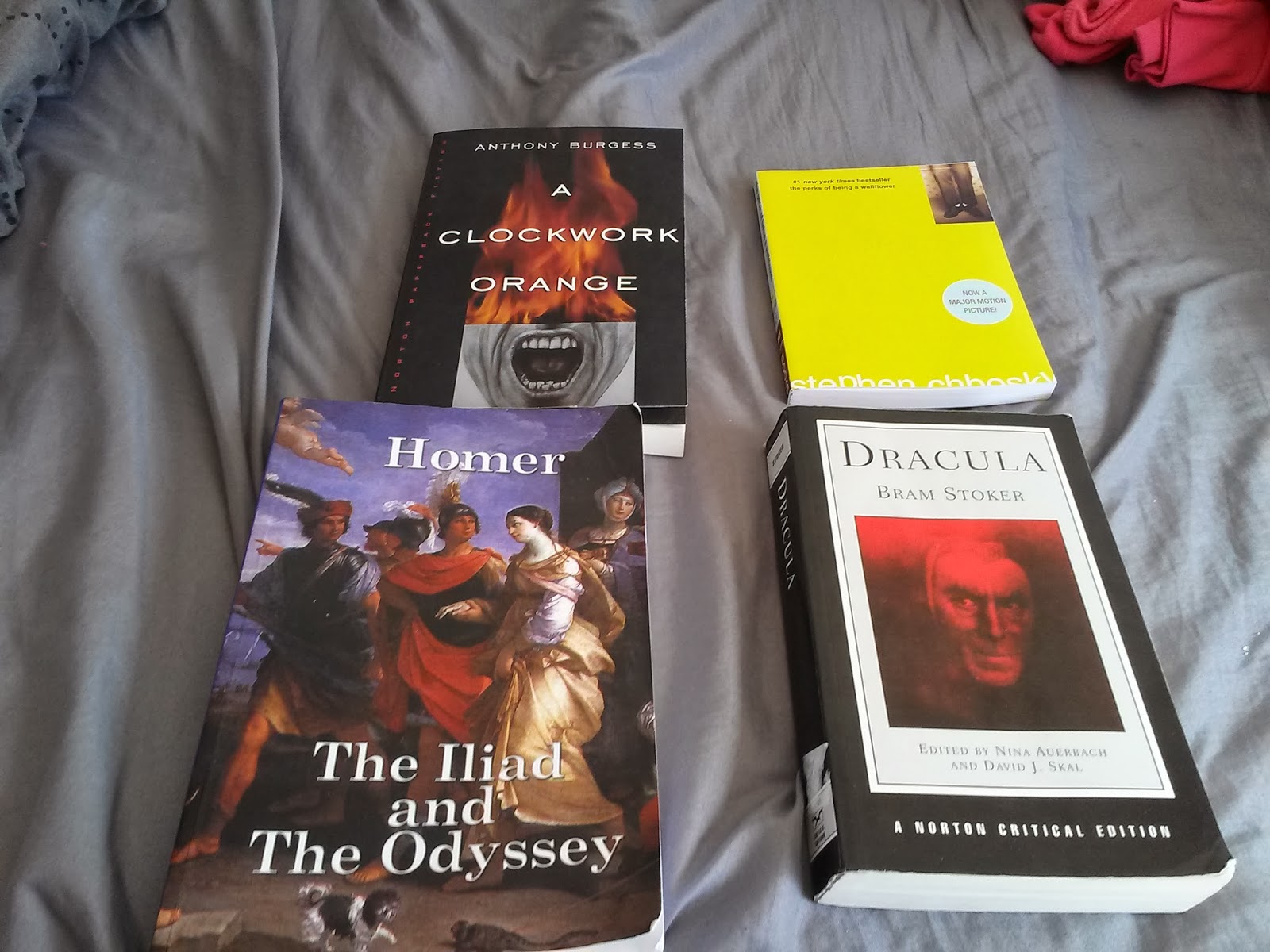 1. A Clockwork Orange by Anthony Burgess- I purchased this one yesterday from my campus bookstore. I've been wanting to read this book for a really long time, so I'm really excited to have it!

2. The Perks of Being a Wallflower by Stephen Chbosky- This was another campus bookstore purchase. Again, I've been eying this book for quite some time and I can't wait to read it.

3. Dracula by Bram Stoker- I purchased this copy from my campus bookstore because it was the required text for my British Literature class. This is currently my third or so copy of this book. I've read this book before, and I really enjoyed it. I did forget some things, so re-reading it for class really made me remember how awesome a book this is. 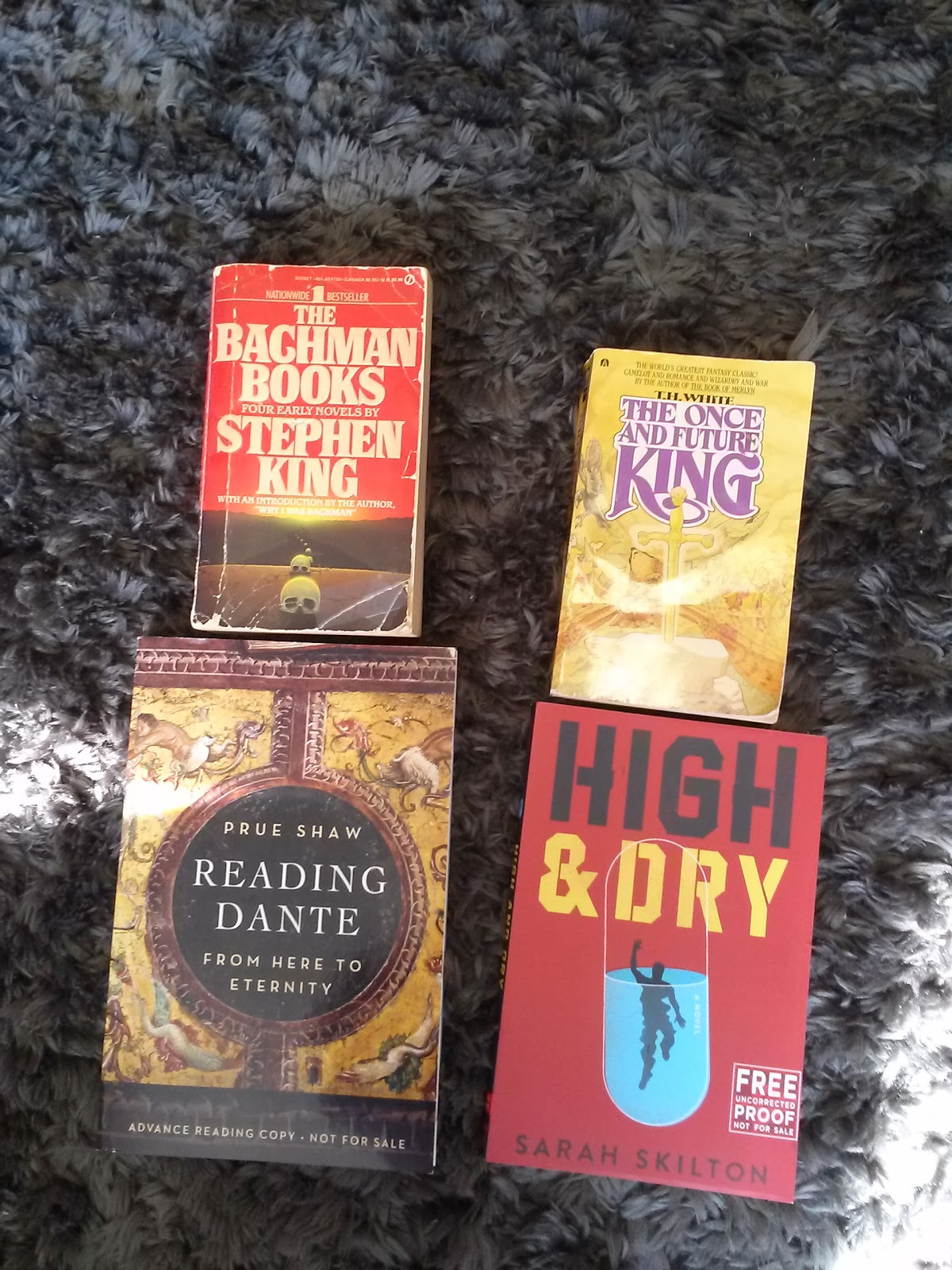 1. The Bachman Books by Stephen King- This is a collection of four of Stephen King's earlier books written under the name Richard Bachman. The collection includes Rage, (no longer in print) (this book was REALLY good!), The Long Walk, Roadwork, and The Running Man. The only one that I've read is Rage, and it was really, really good. I think I bought this collection from Abe Books for maybe $5-ish?

2. The Once and Future King by T.H. White- I believe I purchased this one from Thriftbooks as well. I've always kind of loved the story of King Arthur, and this is one of the most famous tellings, so of course I had to get my hands on it.

3. Reading Dante: From Here to Eternity by Prue Shaw- I won an ARC version of this book from Goodreads. I haven't read any Dante (yet!), but I'm really excited to have this book. It looks like it will be a great companion for when I get my hands on Dante's works.

4. High and Dry by Sarah Skilton-  This is another ARC copy I received via Goodreads. I actually finished this book the night I got it. I really enjoyed it. It was short, and full of excitement.

Alright, so here are all the books I've purchased/received these last couple of months. Again, I'll hopefully be posting a review in the next few days. Also, I think I might post a March TBR tomorrow perhaps. Have a wonderful book-filled weekend guys!

What's This Blog All About?

Hey guys! Lily here. I just wanted to make a quick post outlining what exactly I envision this blog being. Obviously, it's a blog about books. I love reading and buying books and looking at books and imagining the AWESOME library I will one day have. (It's gonna be epic!) And, where most girls blow their pay checks on makeup and shoes and purses, mine are blown on... you guessed it, books. So yeah, I'm pretty obsessed with books. Anyway, a quick outline of the kinds of posts I intend to put up on here:

Okay, so as of right now, that's basically all I have planned. But, if there's anything you want to see, let me know! I'm completely open to ideas! I love ideas! I'll try to come up with a definitive posting schedule within the next week. Also, there might be one or two reviews coming up this weekend.

Alrighty, I'll see you all soon!

Goodreads synopsis: "Framed for a stranger's near-fatal overdose at a party, blackmailed into finding a mysterious flash drive everyone in school seems anxious to suppress, and pressured by his shady best friend to throw an upcoming game, high school soccer player Charlie Dixon spends a frantic week trying to clear his name, win back the girl of his dreams, and escape a past that may be responsible for all his current problems."

I received a proof copy of High and Dry through a Goodreads giveaway and finished the book the day I got it. It's listed as a children's fiction and teen & YA book on NetGalley and specified as a book for readers aged 14 and up. While I do agree that this book is more aimed toward teenagers, I don't think I'd let a 14 year old read it. I gave this book a 4 out of 5 stars on Goodreads, mainly because while I did thoroughly enjoy the book, I felt that it had way to much going on for such a short book (about 250 pages).

Anyway, on to the real review.  So, basically, this book follows high school senior Charlie Dixon through a week of mystery and secrets. As the synopsis says, he get's framed for a girl's LSD overdose after his car is stolen from a party that he was driven home from and had left his car at. He is then enlisted to find a flashdrive by his ex Bridget, soon finding that she isn't quite telling the truth about what's on the flashdrive and also that she isn't the only one looking for it. Not to mention, while all of this is going on, his friend Ryder, a drug user, asks Charlie to throw a big soccer game with the promise of a big payoff for Charlie and Ryder both so Ryder can escape his hell of a life at home. To add onto all of this, Charlie is also trying desperately to win back his ex-girlfriend, Ellie. Add in a complicated high school hierarchy, a few twists and turns, and you've got High and Dry.

All in all, I thought this book was really good. I read it in one sitting and couldn't finish it fast enough. My only qualm was the layers upon layers of mystery and secrets and plot turns. It felt like a little much for such a short novel. It almost gave me whiplash. However, Sarah Skilton was able to tie it all off nice and neatly, and the ending did sneak up on me. As I said above, the book is aimed toward 14 year olds and older, but I do think that's a little young as there is a bit of strong drug and alcohol reference. Maybe 16 and up would be better. Overall the book was excellent, a quick read, and I strongly recommend it.

P.S. Apologies for the crappy review. I promise I'll try to get better as time goes on. Leave a note on what I can do to make this better! Thanks for reading! :)